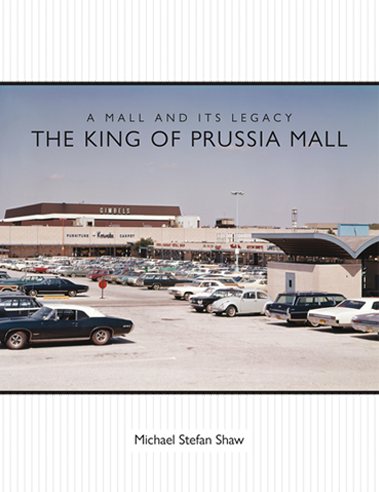 A Mall and Its Legacy

Pennsylvania and more often than not the first thing that comes to mind is the iconic King of Prussia Mall. From its earliest days as an outdoor strip mall to its present day status as a sprawling internationally renowned shopping venue, the King of Prussia Mall has been the focal point of a once sleepy village. King of Prussia resident and historian Michael Shaw has extensively researched the history of the King of Prussia Mall over the better part of four years. Detailed here is a comprehensive narrative of the mall including the backdrop to its introduction from whence Upper Merion Township became a major intersection for key regional highways. Today, the King of Prussia Mall remains a fixture in the community. It has created countless memories for millions of people who walked its many halls and visited its thousands of shops. The future looks bright for this proud success story even in the midst of uncertainty surrounding many of America’s storied indoor shopping malls. Enjoy the journey.

King of Prussia was originally called Reeseville, named after a prominent landowning family of the township. The village was renamed King of Prussia in honor of Frederick the Great, the King of Prussia, ostensibly after locals frequenting a tavern by that name (owned by the Reese family) took the name as its own.

The PA Turnpike from Carlisle to Valley Forge opened in November of 1950. The soon to follow Schuylkill Expressway started its journey towards Philadelphia by opening up a short section of its highway near King of Prussia in 1951. From there, M.A. Kravitz Company, founded by Morris Kravitz a builder of family housing and later one of the first developers of suburban shopping centers, seized upon the synergy created by the highways.

Use A Monorail While You Shop?

Kravco President Arthur Powell discussed the intriguing possibility of connecting the two adjacent mall properties with a two-car monorail to travel on a 1,500-foot track that would run over Goddard (now Mall) Boulevard.

At a December 1976 meeting of the Upper Merion Planning Commission Kravco unveiled its plans to “cash in “on the vacant thirty-acre tract adjacent to the Plaza. Kravco saw a need to capitalize on the growing northeastern demand for higher-end shopping. The Plaza was built on the knowledge that the Philadelphia region in of itself could support the mall’s existence due to a strong per capita household income. Now was the time to take it one step further.

On August 6, 1981, the Court opened for business at 10 am. Combined, the Court and the Plaza totaled seven major department stores and over two hundred fifty shops and restaurants. Together, they occupied 2,400,000 square feet of retail space. Kravco’s expectation was that the colossus mall would potentially draw from one million customers who could reach the mall in less than thirty minutes of driving time.

In 1986, Gimbels was sold to Stern’s, Bamberger’s was replaced by Macy’s, and Strawbridge & Clothier purchased Abraham & Straus. Abraham & Straus had struggled for years in the Philadelphia region to gain a sizable customer foothold, all to no avail. By early 1987 the King of Prussia Court Abraham & Straus was out of business. The Willow Grove store closed in January of 1988.